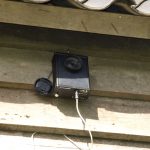 Four years ago, in Vlierden, Netherlands, an industrial building housing bats was demolished. As a mitigating measure a bat tower was erected. The tower was soon inhabited by various species, but not by the serotine bats for whom the measure was specifically intended. So, Benjamin Backx, bat researcher and ecologist at Eco-assist, decided to take action and lure the serotine bats to the tower. He used the Apodemus BatLure, a device that plays recordings of bat calls.

To attract the serotine bats, the Apodemus BatLure was hung on the tower from March to September. "There was no power point," says Benjamin, “which meant that I would have to come back regularly to replace the batteries. I asked Apodemus if they could think of a solution. They suggested a solar panel to which I could connect the Apodemus BatLure”. It turned out to be a handy panel, about the size of an A4, with a battery. "The great thing about the small panel was of course that I could transport and install it by myself," says Benjamin.

In addition to the solar panel, Benjamin used a timer box to set the times that the Apodemus Batlure produces calls. "It saves electricity," he says. “But it is also important for the calls to be as natural as possible. If the serotine bats would hear their own species’ calling during the day, they would get confused. For that reason I also use the intervals settings of the timer box. You don't want the calls to be played all the time. With the timer box I select natural times and intervals.”

The Apodemus BatLure and its accessories play an important role in the protection of bats. Of course, there is no sense in taking mitigating and compensating measures if the desired species cannot find them. Benjamin is satisfied with the equipment. "It's easy to carry and hang on the tower," he says. “During those months I have been to the site four times to check the equipment and to monitor. Everything worked well. It saves a lot of time and money if you can rely on your equipment."